The Rise of Roulette in the Movies

When you think of roulette many of us, particularly the movie buffs amongst us, will conjure up iconic images of the game with memorable characters from the silver screen perching over a table enjoying all the gaming action nearby.

Its fair to say that the movie world has extreme influence over our habits, whether its the things we say or the clothes and products we buy. We want to feel like our on-screen heroes and we want to live their experiences and so when you see an iconic figure venturing into a casino, playing it cool and winning big at the roulette table it certainly can have that influence to a certain degree.

Theres no direct evidence to suggest that this rise in the popularity of roulette once more has anything to do with the movie world but there has been an incredible slew of gambling films that have been unleashed to date which will certainly have helped bring in new and excited players into the casino environment.

There has been a great cross section of casino-based movies from all types of genre that have entertained audiences over the years and whilst they dont always directly revolve around the game of roulette itself theres plenty of other gambling action that has found its way on screen.

Even some where major twists in the plot have directly resulted from some roulette gaming action.

DIAMONDS ARE FOREVER (1971)
There arent many movie icons out there more famous than world famous secret agent 007. James Bond has always been the enviable figure of many movie lovers who have come to appreciate his suaveness, skills and abilities over the years.

There have been plenty of casino-based scenes and sequences that Bond has been involved in throughout the generations and some of the most memorable have always featured a turn at the roulette wheel.
In 1971s Diamonds Are Forever actor Sean Connery played the role and was spotted early on in the movie whilst looking for diamond smugglers. Of course Bond being Bond he even manages to land a win.

RUN LOLA RUN (1998)
In this unique German effort actress Franka Potente (The Bourne Identity) spends most of her time running around in order to stop her boyfriend from robbing a bank.

She has 20 minutes to find 100,000 Deutsche Marks and this 20 minute segment plays out again and again with varied endings until she eventually gets it right when she decides to head to a local casino and put all her money on the number 20 on the roulette wheel.

After some lung exploding screams she eventually wins exactly what she needs.

INDECENT PROPOSAL (1993)
In director Adrian Lynes 1993 drama Indecent Proposal a trip to Vegas ends badly for a loving couple who have to deal with a number of moralistic decisions after a millionaire (played by Robert Redford) offers them a million dollars to spend one night with the wife, a decision that will have serious repercussions for their relationship and one that they have to take.

Its a great example of how the classic game of roulette helps drive the plot into unexpected areas and is the game responsible for their life-changing losses.

DARK HAZARD (1934)
You can to go all the way back to 1934 in the movie world to see that even decades back the classic game of roulette can still have an impact over a theatrical plotline.

Dark Hazard refers to a racing dog that Jim buys which makes him a small fortune which he almost instantly loses at the roulette table.

CROUPIER (1999)
Mike Hodges’ ‘Croupier’ garnered a lot of attention when it was released back in 1999. This British neo-noir movie focused on an aspiring writer who was penning a novel based around his current experiences working as a croupier in a local casino.

Although the movie isnt predominantly based around any particular game the main character Jack, played by a very young Clive Owen, spends most his time around the roulette wheel which becomes a notable focal point as it almost parallels the unpredictability of corruption in the casino and the people around him as the plot unfolds.

TOY STORY 3 (2010)
Not all movies use roulette in such dramatic ways. Take Pixars brilliant threequel Toy Story 3 for example.
In one memorable scene, which fans of roulette would have absolutely loved, the familiar roulette wheel is replaced by the classic educational See ‘n Say toy.

So instead of the win being indicated by a corresponding number each of the toy players are waiting for the spinning central arrow to land on a farm animal.

Its the Octopus that gets the win as the sound of a duck blares out and the tentacled one swiftly grabs his winnings. 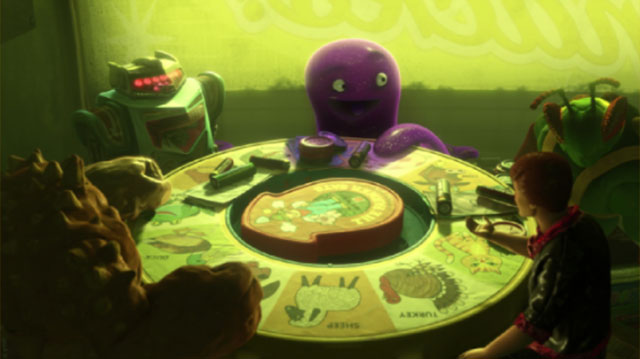