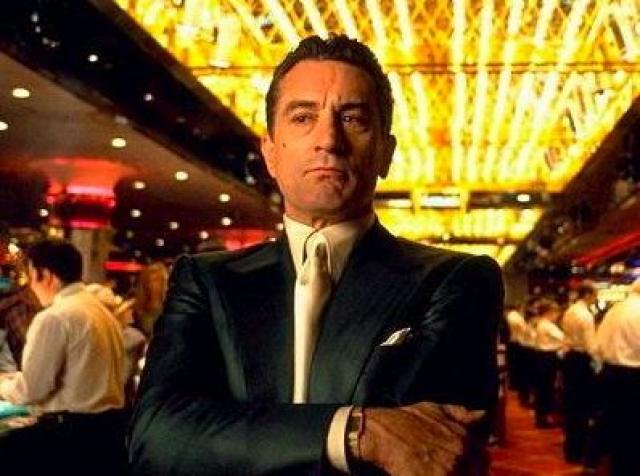 Gambling and casinos have a long and colorful history of featuring in the movies. Sometimes they serve as just a location which is part of a greater story, other times they are the the whole premise of the movie itself. Either way the romanticism and thrill of gambling always adds an edge to a movie, which when done well can really make a great story become an iconic one.

It’d be straightforward to make a list of the top ten or even twenty best gambling movies – but selecting a top three is much more tricky! With this in mind this top three will be movies where gambling is absolutely central to the whole plot. It will not feature movies which may have incredible gambling themed scenes but gambling is secondary to the main plot.

So without further ado – and in no particular order – here’s the best three gambling movies ever!

It’ll come as no surprise that Martin Scorsese’s sprawling Vegas based epic features on this list. Based upon the true story of top bookie turned casino kingpin Ace Rothstein (Robert De Niro), this is without doubt one of the finest movies ever made of a booming Las Vegas being run by the mob. The casino is without question the silent star of the movie, with glorious cinematography complementing fantastic performances from the stars.

At heart this is a story all about relationships and how money and greed can ultimately erode even the strongest bonds. As the story develops it becomes ever clearer that the mob aren’t the kind to give casino bonus freebies, and it becomes a life and death struggle for every character involved. Overall it’s a thrilling and fascinating movie that every gambling fan really must see.

Probably the most famous poker movie ever made, this cult classic sees a young Matt Damon playing a mathematical prodigy who gives up his work as a janitor to try his hand at the seedy underground poker circuit. Things don’t go quite as planned, and facing enormous debts and just a few days to win the money to pay them down, the pressure swiftly mounts as the deadline creeps up.

As a movie it’s a good watch – but not quite deserving of classic status – yet as a film based upon gambling and high stakes poker it’s one of the best ever. The variety of colorful characters are what really hold this movie together, something anyone who has played poker with strangers is sure to appreciate!

The Cooler is another movie which approaches gambling from the players perspective. In this case it’s from an unlucky casino employee who has gambled themselves into almost serfdom, obliged to work at the casino while paying off their debts (A ‘Cooler’). Yet the luckless cooler finds a winning streak when he falls in love with a cocktail waitress – much to the chagrin of casino boss Alec Baldwin who puts in an Oscar nominated performance.

Ultimately this is a movie that shows how luck can – sometimes – change through the most unexpected and unlikely of events. It’s a fascinating study into the way gambling can offer such an intense form of escapism, sometimes for the better, sometimes for the worse. Overall it’s a great movie and one that despite critical acclaim tends to have been largely forgotten about nowadays. Seek it out, it’s a classic!