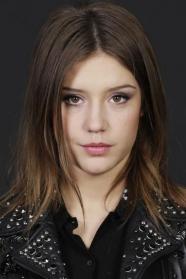 Adèle Exarchopoulos (born 22 November 1993) is a French actress. She is known for her leading performance as Adèle in Blue Is the Warmest Colour, a role which gave her worldwide attention and critical acclaim and she became the youngest artist ever to be awarded the Palme d'Or at the Cannes Film Festival.

Description above from the Wikipedia article Adèle Exarchopoulos, licensed under CC-BY-SA, full list of contributors on Wikipedia.
2013 - Blue is the Warmest Color