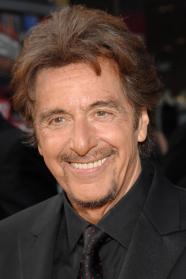 Alfredo James "Al" Pacino (born April 25, 1940) is an American film and stage actor and director. He is famous for playing mobsters, including Michael Corleone in The Godfather trilogy, Tony Montana in Scarface, Alphonse "Big Boy" Caprice in Dick Tracy and Carlito Brigante in Carlito's Way, though he has also appeared several times on the other side of the law — as a police officer, detective and a lawyer. His role as Frank Slade in Scent of a Woman won him the Academy Award for Best Actor in 1992 after receiving seven previous Oscar nominations. He made his feature film debut in the 1969 film Me, Natalie in a minor supporting role, before playing the leading role in the 1971 drama The Panic in Needle Park. Pacino made his major breakthrough when he was given the role of Michael Corleone in The Godfather in 1972, which earned him an Academy Award nomination for Best Supporting Actor. Other Oscar nominations for Best Supporting Actor were for Dick Tracy and Glengarry Glen Ross. Oscar nominations for Best Actor include The Godfather Part II, Serpico, Dog Day Afternoon, the court room drama ...And Justice for All and Scent of a Woman. In addition to a career in film, he has also enjoyed a successful career on stage, picking up Tony Awards for Does a Tiger Wear a Necktie? and The Basic Training of Pavlo Hummel. His love of Shakespeare led him to direct his first film with Looking for Richard, a part documentary on the play Richard III. Pacino has received numerous lifetime achievement awards, including one from the American Film Institute. He is a method actor, taught mainly by Lee Strasberg and Charlie Laughton at the Actors Studio in New York. Although he has never married, Pacino has had several relationships with actresses and has three children Description above from the Wikipedia article Al Pacino, licensed under CC-BY-SA, full list of contributors on Wikipedia
- The Godfather: Part III
1972 - The Godfather
1973 - Serpico
1974 - The Godfather: Part II
1975 - Dog Day Afternoon
1983 - Scarface
1993 - Carlito's Way
1995 - Heat
1997 - Donnie Brasco
1997 - The Devil's Advocate
1999 - The Insider
1999 - Any Given Sunday
2003 - Gigli
2004 - William Shakespeare's The Merchant of Venice
2005 - Two For The Money
2007 - Ocean's 13
2008 - 88 Minutes
2008 - Righteous Kill
2011 - The Son of No One
2011 - Jack and Jill
2013 - Stand Up Guys
2013 - Despicable Me 2
2015 - The Humbling
2015 - Danny Collins
2016 - Misconduct
2017 - Hangman
2018 - Paterno