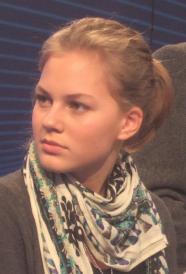 Alicia von Rittberg is a German actress best
known for her role as Emma in the film Fury.

For her starring role as a foster child in the ZDF TV movie And
all were Silent, she received the 2013 Young Artist Award at the Bavarian
Television Award.

Besides acting she is studying Corporate Management and
Economics at Zeppelin University in Friedrichshafen.

Description above from the Wikipedia article Alicia von
Rittberg, licensed under CC-BY-SA, full list of contributors on Wikipedia.
2016 - Our Kind of Traitor