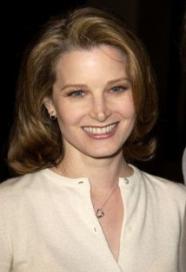 Bridget Jane Fonda (born 27 January 1964) is an American actress. She is best known for her roles in films such as The Godfather Part III, Single White Female, Point of No Return, It Could Happen to You, and Jackie Brown. She is the daughter of Peter Fonda.

Description above from the Wikipedia article Bridget Fonda, licensed under CC-BY-SA, full list of contributors on Wikipedia.
- The Godfather: Part III
1997 - Jackie Brown