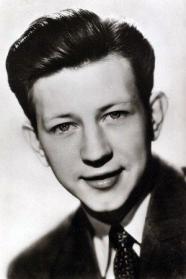 Donald David Dixon Ronald O’Connor (August 28, 1925 – September 27, 2003) was an American dancer, singer, and actor who came to fame in a series of movies in which he co-starred alternately with Gloria Jean, Peggy Ryan, and Francis the Talking Mule. He is best known today for his role as Gene Kelly's friend and colleague in Singin' in the Rain (1952).

Description above from the Wikipedia article  Donald O’Connor licensed under CC-BY-SA, full list of contributors on Wikipedia.
1952 - Singin' In The Rain