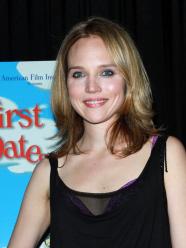 Erica Lei Leerhsen  (born February 14, 1976) is an American actress. She is best known for her lead roles in the horror films Book of Shadows: Blair Witch 2, The Texas Chainsaw Massacre, and Wrong Turn 2, and for which she is often referred to as a modern day scream queen. She is also known for her acting on television series, such as her lead role in The Guardian and several guest appearances, including The Sopranos, Alias, and others.

Description above from the Wikipedia article Erica Leerhsen, licensed under CC-BY-SA, full list of contributors on Wikipedia
2014 - Magic in the Moonlight