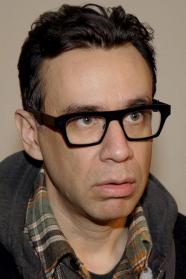 From Wikipedia, the free encyclopedia. Alfredo "Fred" Armisen (born December 4, 1966) is an American actor, comedian and musician best known for his work as a cast member on Saturday Night Live, and portraying off-color foreigners in various comedy films such as EuroTrip, Cop Out or Anchorman: The Legend of Ron Burgundy. With Carrie Brownstein, he is the co-creator and co-star of the IFC sketch series Portlandia.