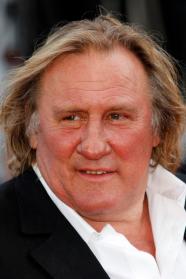 Gérard Xavier Marcel Depardieu (born 27 December 1948) is a French actor, film-maker, businessman and vineyard owner. He is one of the most prolific character actors in film history, having completed approximately 170 movies since 1967. He has twice won the César Award for Best Actor as well as the Golden Globe award for Best Actor in Green Card. After he garnered huge critical acclaim for the title role in Cyrano de Bergerac, which landed him a nomination for an Academy Award, Depardieu acted in many big budget Hollywood movies. He is a Chevalier of the Légion d'honneur and Chevalier of the Ordre national du Mérite. He was granted citizenship of Russia in January 2013 and the same month became a cultural ambassador of Montenegro. In 2015 he left Russia declaring that he intends to give up the citizenship and to live in Belgium.
2003 - City Of Ghosts
2004 - Bon Voyage
2006 - Last Holiday
2007 - Paris, Je T'aime
2007 - La Vie En Rose
2008 - Babylon A.D.
2010 - Mesrine: Killer Instinct
2010 - Inspector Bellamy
2012 - Life of Pi
2018 - Let the Sunshine In