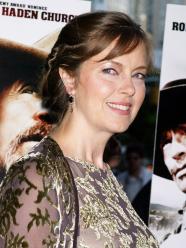 In 1996 she won an Emmy Award for her work as Empress Alexandra Fyodorovna of Russia in the television film Rasputin: Dark Servant of Destiny and was nominated for a Golden Globe and numerous other awards. In 2007 she received an Emmy Award nomination for Supporting Actress In A Miniseries Or A Movie for Broken Trail.

Scacchi is fluent in English, French, German and Italian, which has made her a popular choice for European casting directors and has been an asset when working for European directors and producers.
1992 - The Player
2005 - Syriana