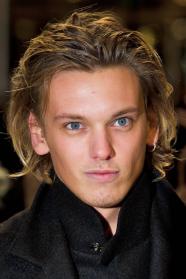 James "Jamie" Campbell M. Bower (born 22 November 1988) is an English actor who is best known for his role as Anthony Hope in Tim Burton's Sweeney Todd: The Demon Barber of Fleet Street, his role of Caius in The Twilight Saga: New Moon and his role of King Arthur in the Starz original series Camelot. He also appeared as the young Gellert Grindelwald in the two-part Harry Potter and the Deathly Hallows and will play Jace Wayland in the upcoming film adaption of the Mortal Instruments (series).