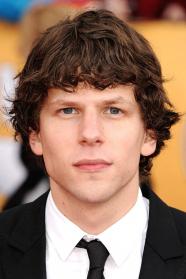 Jesse Adam Eisenberg (born October 5, 1983) is an American actor. He made his screen debut with the comedy-drama television series Get Real from 1999 to 2000. After his first leading role in the film Roger Dodger (2002), he appeared in such films as The Squid and the Whale (2005) and The Education of Charlie Banks (2007).

In 2008, Eisenberg was honored alongside Olivia Wilde with the Vail Film Festival Rising Star Award. In 2009, he starred in the comedy drama Adventureland and the zombie comedy Zombieland, for which he gained critical acclaim. He then played Facebook co-founder Mark Zuckerberg in The Social Network (2010), for which he received a Golden Globe and Academy Award nomination in the Best Actor category. Since then, he voiced the lead role in Rio (2011), and has filmed the adventure comedy 30 Minutes or Less (2011).