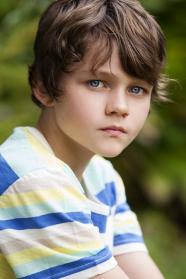 Levi Miller is a child actor. His major film debut will be in the 2015 film, Pan as Peter Pan. He previously has appeared only in the musical "A Heartbeat Away" from 2011 with Sebastian Gregory, Isabel Lucas andWilliam Zappa, and in short films such as Akiva (2010) and Great Adventures (2012). He played General Philbrick as a Child, in one episode of Terra Nova TV series.
2015 - Pan
2018 - A Wrinkle in Time