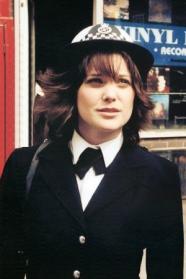 Liz White (born 1979 in Rotherham, South Yorkshire) is an English actress, best known for her regular role as WPC/WDC Annie Cartwright in the BBC time travel drama Life on Mars, which began in January 2006. She trained at the Liverpool Institute of Performing Arts, and also appeared in the 2003 TV series Teachers and the 2004 Mike Leigh film, Vera Drake.

She featured in the music video for Bush's final single "Inflatable". She will also star in the Hammer Films 2012 adaptation of The Woman in Black as the woman herself.

Description above from the Wikipedia article Liz White (actress), licensed under CC-BY-SA, full list of contributors on Wikipedia. ​
2014 - U Want Me 2 Kill Him?