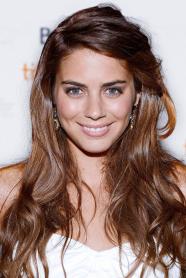 In 2007 Izzo was modeling and studying journalism at the University of Los Andes (Universidad de los Andes) when she moved to New York to study acting at the Lee Strasberg Theatre and Film Institute.

In 2010, she made her debuted as an actress in Instrucciones para mi funeral, an independent film made by Sebastián Radic as a graduation project.

Her modeling career reached its peak in 2011 when Izzo and her mother, Rosita Parsons, were invited to São Paulo Fashion Week where they met Gisele Bundchen. The meeting resulted in Lorenza becoming the new face of Colcci, a Brazilian fashion company.

In 2012, with one commercial feature movie to her name and three more then-about to be released Que pena tu familia, Aftershock, and The Green Inferno, Lorenza moved to Los Angeles, when she soon secured small roles in Hemlock Grove and I Am Victor.

In 2015, she starred alongside Keanu Reeves and Ana de Armas in Knock Knock, a horror film directed by her husband Eli Roth and filmed in Santiago’s Chicureo neighbourhood.
2015 - The Stranger
2015 - The Green Inferno
2015 - Knock Knock
2018 - The House with a Clock in Its Walls