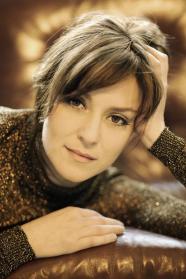 Martina Gedeck  (born 14 September 1961) is a German actress. She came to international fame as the main character in the German films Mostly Martha and The Lives of Others. She has won numerous awards, including the Deutscher Filmpreis (German Film Award) in both 1997 and 2002.

Description above from the Wikipedia article Martina Gedeck, licensed under CC-BY-SA, full list of contributors on Wikipedia.
2007 - The Lives Of Others (Leben der Anderen, Das)