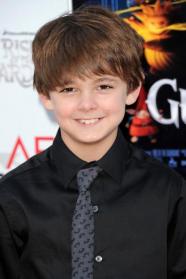 Max Charles (born August 18, 2003) is an American child actor. In addition to his appearance in the 2012 film The Three Stooges, Charles played a young Peter Parker in The Amazing Spider-Man and has a role in the ABC comedy science fiction series The Neighbors. In 2014, Charles will play Sherman in DreamWorks Animation's Mr. Peabody & Sherman alongside Ty Burrell.
2014 - Mr. Peabody & Sherman