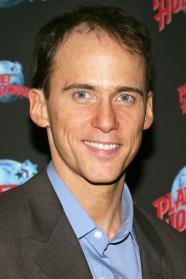 Neal Huff is an American actor. He received his MFA from the Tisch School of the Arts at New York University. He has appeared on Broadway in revivals of The Tempest (1995) and The Lion in Winter (1999) and the Tony Award-winning Take Me Out (2003). Off-Broadway he has appeared in The Foreigner (2004) and The Little Dog Laughed (2006).