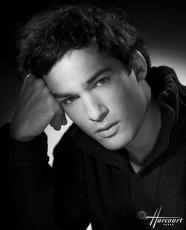 Nicolas Cazalé (born 24 April 1977 in Pau, France) is a French model and actor who is most noted for his role in the 2004 French film, Le Grand Voyage for which he won a Jury Award for Best Actor at the 2005 Newport International Film Festival. He was also named one of European cinema's up-and-coming talents and won the Shooting Stars Award in 2008.