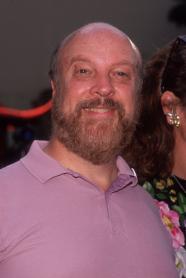 From Wikipedia, the free encyclopedia Paul Bartel (August 6, 1938 – May 13, 2000) was an American actor, writer and director. Bartel was perhaps most known for his 1982 hit black comedy Eating Raoul, which he wrote, starred in and directed. Description above from the Wikipedia article Paul Bartel, licensed under CC-BY-SA, full list of contributors on Wikipedia.
1998 - Billy's Hollywood Screen Kiss