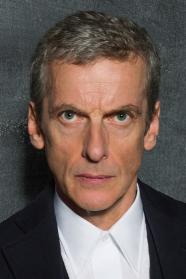 From Wikipedia, the free encyclopedia. Peter Dougan Capaldi (born 14 April 1958) is an Academy Award and BAFTA award winning Scottish actor and film director. In 1995, his short film Franz Kafka's It's a Wonderful Life won the Academy Award for Live Action Short Film. As an actor, he played Oldsen in Local Hero, John Frobisher in Torchwood and political spin doctor Malcolm Tucker in the British TV comedy series The Thick of It and the affiliated feature film In the Loop. He also portrayed Balthazar, one of the Magi, in the 2010 BBC adaptation of The Nativity.

Description above from the Wikipedia article  Peter Capaldi, licensed under CC-BY-SA, full list of contributors on Wikipedia.
2013 - The Fifth Estate
2018 - Paddington 2
2018 - Christopher Robin