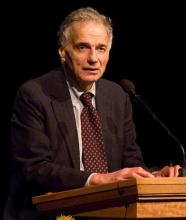 Ralph Nader (born February 27, 1934) is an American progressive political activist, and four-time candidate for President of the United States, having run as a Green Party candidate in 1996 and 2000, and as an independent candidate in 2004 and 2008. He is also an author, lecturer, and attorney.

In 1990, Life magazine named Nader one of the 100 most influential Americans of the 20th century.

In 2006 The Atlantic Monthly, calling Nader one of the hundred most influential Americans in history, said, "He made the cars we drive safer; thirty years later, he made George W. Bush the president."

Description above from the Wikipedia article Ralph Nader, licensed under CC-BY-SA, full list of contributors on Wikipedia.
2007 - An Unreasonable Man