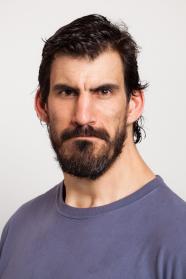 A French Canadian from rural New Brunswick, it was clear from an early age that Robert would be a very big boy. In the first grade he stood taller than his teacher and that made him awkward and a bit shy, so growing up he took shelter in his own dreams. One of those dreams was to become a professional wrestler, and for a time he realized that dream with a successful career in the W.W.F. At the urging of a friend, he brought the confidence and poise learned in the ring to the big screen. Among his most memorable performances are the terrifying Uber Immortal in Zack Snyder's 300, the ominous and powerful Dredger in Guy Ritchie's Sherlock Homes and the unstoppable Minotaur in Tarsem Singh's Immortals.
2011 - The Big Bang
2011 - Immortals
2013 - Percy Jackson: Sea of Monsters