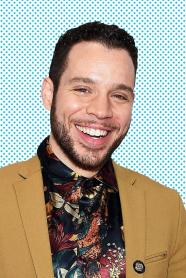 Robin de Jesús is an American film and theater actor of Puerto Rican descent. He is perhaps best known for playing the role of Sonny in the 2008 Broadway musical IN THE HEIGHTS, for which he received a Tony Award nomination for Best Featured Actor in a Musical. From 2010 to 2011, he was part of the revival cast of La Cage aux Folles.
- Fat Girls
2003 - Camp