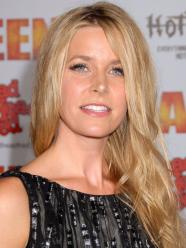 Sheri Lyn Skurkis (born September 26, 1970) is an American actress and fashion designer. She legally changed her name to Sheri Moon and later Sheri Moon Zombie after she married her long-term boyfriend Rob Zombie. She has been described as a "scream queen". Description above from the Wikipedia article Sheri Moon, licensed under CC-BY-SA, full list of contributors on Wikipedia .
2007 - Halloween (2007)
2013 - The Lords of Salem
2016 - 31