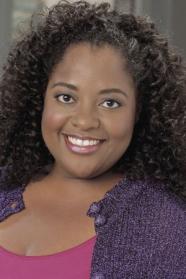 Sherri Evonne Shepherd (born April 22, 1967) is an American comedienne, actress, and television personality. She is one of five co-hosts on the ABC daytime talkshow, The View, as well as being the current host of the Newlywed Game and having a recurring role as Angie Jordan on the NBC series 30 Rock. As an actress, she has starred in the sitcom Less Than Perfect and her own sitcom Sherri on Lifetime.