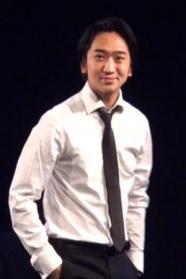 Tanroh Ishida, is a London based Japanese actor.

He is both a classically trained actor from Guildhall School of Music and Drama, and a professionally trained Japanese Traditional Theatre actor.

Tanroh started training in Japanese Traditional Noh/Kyogen Theatre at the age of three. His father and his father's master were his own masters in Japan, during this period. With his theatre company he performed at a number of theatres nationally and internationally; including the Carnegie Hall and Shakespeare's Globe.

At the age of 15 Tanroh became interested in learning about the western style of theatre. He moved to England to study and audition for drama schools. He was accepted at the prestigious Guildhall School of Music and Drama. After graduating from Guildhall, Tanroh formed his own theatre company to explore his rare experiences as an actor, having had the unique privilege of classical training in both the East and West. This "Tea Leaf Theatre" company is based on his life time ambition of marrying Japanese and Western theatre and has received critical acclaim; such as 5 star reviews at the Edinburgh festival. - IMDb Mini Biography By: WBM
2014 - The Railway Man