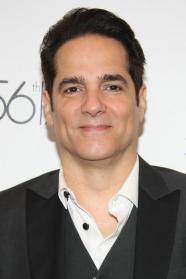 Yul Vázquez was born in Cuba. He is an actor and he is married to Linda Larkin. He has appeared as “Bob” in the Seinfeld episodes “The Soup Nazi”, “The Sponge” and “The Puerto Rican Day”.

Yul Vázquez currently serves as co-Artistic Director of LAByrinth Theater Company with Stephen Adly Guirgis & Mimi O'Donnell in New York City. In 2010 Yul Vazquez founded mechanizedmules. A film production company with Ed Vassallo, Rick Rodgers and Robert Leaver. Their first short film F--K premiered at the Tribeca Film Festival in spring of 2010. They are currently in production for their first feature film which is shot in Sugar Hill section of New York City - surrounding the last active graveyard in Manhattan. Trinity Cemetery between 152nd and 155th street on the west side of Manhattan.
2007 - Music Within
2008 - Anamorph
2008 - Che
2013 - Captain Phillips
2015 - The Cobbler
2017 - Last Flag Flying
2018 - Gringo